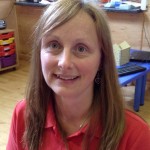 Marie Winnett, Pre-School Manager, has worked in the pre-school since 2015, when she returned to the role of Manager following a break to have her youngest son. Marie has a Level 3 Diploma for Children & Young People’s Workforce, as well as OCN Level 3 Forest School Leader qualification. Marie holds further qualifications to support her roles as a Special Educational Needs Co-Ordinator, Paediatric First Aider, Deputy Designated Safeguarding Lead and more. Marie has three children, Harry, Jack and Archie.

Helen Roberts, Deputy Pre-School Manager, has worked in the preschool since 2015. Helen has a City & Guilds Level 3 Diploma in Early Years, as well as Business Administration qualifications which help in the office. Helen holds further qualifications to support her role as Designated Safeguarding Lead and Paediatric First Aider. Helen has three children, Belle, Caitlin and Benjamin.

Becci Garner, Pre-School Practitioner joined the pre-school in 2014. Becci has a BTEC National Diploma in Childhood Studies as well as Safeguarding Children Level 3 to support her role as Deputy Designated Safeguarding Lead, and Paediatric First Aid qualification. Becci has a wealth of experience, with children and animals, as she also works on her family farm. Becci has two children, Lienna and Dexter.

Annabel Forrest, Pre-School Practitioner and Forest School Leader joined the preschool in 2018 and has a Level 2 Certificate in the Children & Young People’s Workforce. Annabel is an inspiration outside, and is waiting for her Level 3 Forest School Leader certificate to arrive now! Annabel is also an experienced 1-2-1 SEN practitioner, and holds further qualifications to support her role, such as Paediatric First Aid and Safeguarding Level 3.

Claudia Thimbleby, Pre-School Practitioner joined the pre-school as a volunteer in 2019 and has gone on to complete her Level 2 Certificate for the Children & Young People’s Workforce. Claudia has proven herself such an asset, she is now employed within the pre-school, and is studying her Level 3 qualification. Claudia holds additional qualifications in Paediatric First Aid and Safeguarding Level 2. Claudia has two children, Poppy-Mai and Nate.

Beth Gillan, 1-2-1 SEN Practitioner joined the pre-school in October 2021, having previously been employed here in 2014-2015, and holds the qualification City & Guilds Level 3 Diploma. Beth is an experienced practitioner, with many skills including British Sign Language. Beth is also a busy parent to three children.

Lydia Redgrave, Play Assistant initially joined the pre-school in 2019, and returned to work again in 2021 following her maternity leave. Lydia is a firm favourite amongst the children, and has a certificate in Paediatric First Aid. Lydia has one child, Dora.

Frankie Simkiss, Apprentice, joined us in September 2021 too. Frankie joined us straight from school and has already fitted in well, getting to know the children and getting to grips with her first assignment. Frankie has also completed her Paediatric First Aid qualification.

All our staff members are dedicated to improving their knowledge, qualifications and practice, and regularly attend a wide range of appropriate courses.

Whitchurch Pre-School is an OFSTED registered Pre-School, run from the village hall in Whitchurch Canonicorum.

Whitchurch Canonicorum is a beautiful West Dorset village, providing a great setting for the children to explore, play and learn in. Whitchurch has a fantastic village park right next to our Pre-School which we visit daily, providing lots of extra fun outside space.

At Whitchurch Pre-School we remember, “Children are like snowflakes, each one is different!”